Frankie Sandford 'To Marry This Weekend' 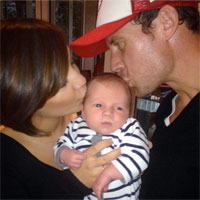 According to The Mirror, The Saturdays' singer and her footballer partner are due to tie the knot tomorrow (19 July).

Very few details are known about the couple's big day, but it is understood JLS are to reunite for a special performance at the ceremony. The pair are then expected to fly to the Seychelles for their honeymoon and stay at the same resort Prince William and Kate Middleton chose for their honeymoon.

A source is quoted by the paper as saying: "It's [Seychelles] the ultimate location, and literally fit for a King  at least a future one  so it's going to be amazing.

"They're planning relaxing massages on the beach and hiring a yacht to tour some of the islands  Frankie is so excited."

Sandford, 25, and Bridge, 33, have been in a relationship since December 2010. In May 2013, the couple confirmed they were expecting their first child together. The news came just weeks after they announced their engagement. In October, the pair welcomed a son, Parker.