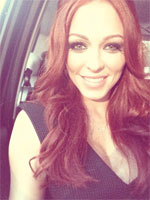 Natasha Hamilton has revealed what she will call her unborn daughter.

The former Atomic Kitten singer, who is pregnant with her fourth child, told OK! magazine that her little girl will be called Ella.

Hamilton, 32, and her boyfriend Ritchie Neville, admitted they have already chosen a name, even though their daughter isn't due for another 10 weeks.

Talking about the moniker, the singer said: "I've always liked Ella and it's not overused. There's no middle name yet but at the baby shower our mums were throwing out names."