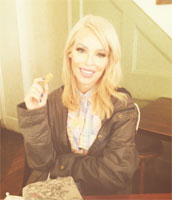 Katie Piper has revealed she is engaged.

The charity campaigner and television personality confirmed her happy news over the weekend.

Taking to Twitter, she told her followers: "So excited to tell you all... I became someone's fiancé last night! I'm engaged to be married :) (sic)".

Piper, 31, and her long-term partner, James, have tried to keep their romance out of the spotlight but they are understood to have been in a relationship for a couple of years. In September last year, the couple announced they were expecting their first child together.

Their daughter, Belle Elizabeth, was born in March 2014.